A demonstration of Netflix’s video streaming technology took place at the EuroBSD conference. That in itself is not significant, but the company’s optimizations to reach 400 Gbps per server are certainly remarkable.

According to developer Drew Gallatin, the popular streaming service is powered by AMD Epyc-7502P servers with 32 cores and 256 GB of DDR4-3200 RAM. Four 100 GbE connections are provided by two Mellanox ConnectX-6 Dx switches. They use FreeBSD. Due to the limited amount of memory available, the developer has configured the systems to support data rates of up to 400 Gbps.

Gallatin was able to achieve this by using TLS offload to transfer data directly through the network infrastructure. This is enabled by the FreeBSD kernel, which reduces the load on the CPU. However, while the TLS session is still formed in user space, the keys are transferred to the network hardware for encryption through the kernel. It is no longer necessary to use the processor. 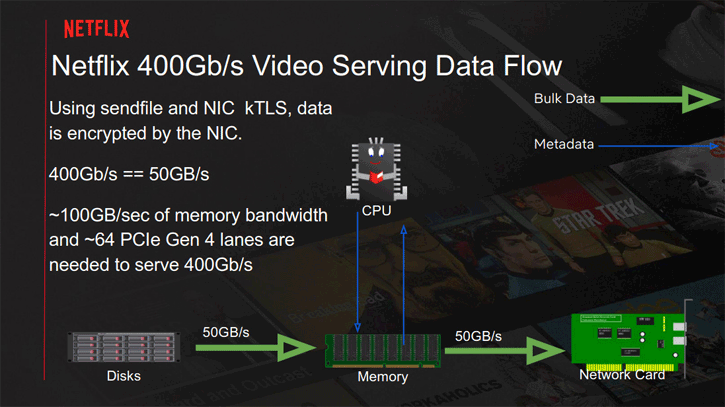 TLS offloading on Intel hardware has yet to be tested, according to the team. In addition, they already have hardware prototypes capable of 800 Gbps network connections, although none of them have been tested. Discover its presentation, which can be Download here.

Netflix plans to offer games in addition to movies and series – 07/15/2021 08:43
Netflix streaming will likely be extended with games. In order to take over game support, Netflix is ​​now actively recruiting staff ….

Netflix signs John Wick Writers to make Splinter Cell TV series – 07/31/2020 14:01
A hugely popular PC game series was, of course, Splinter Cell, and it turns out the franchise will be headed to a TV series on Netflix ….

Netflix explains how it will reduce bandwidth by 25% (same resolution, lower bitrate) – 03/23/2020 2:03 PM
Everyone is at home, so everyone is on the internet, streaming, downloading games, etc. The European Union has asked companies like Netflix, Amazon and YouTube to make sure we use TV …

Netflix has started showing Top Ten Most Popular Video Lists – 02/26/2020 09:42
Just like we do with Steam listings, Netflix now also shows which ten movies and series are the most popular on its platform. The video service shows films and series separately with a logo …

“It’s great to be back”: Pasitoa relishes the chance to come home with Force | Latest rugby news

6 cool things you can do with a virtual private server